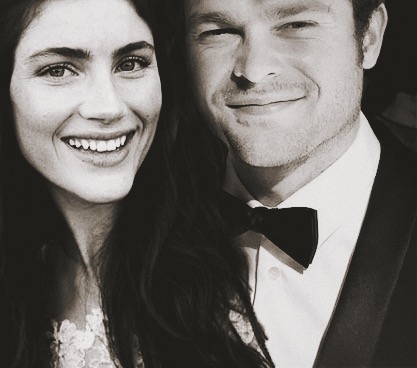 Eden Victoria Amoruso and Sutter Owen Davies, of Beaufort, South Carolina, were united in marriage on October 7th, 2018 during an intimate woodland ceremony in the Carolina Sandhills, with close friends and family present. Pastor Eric Oglethorpe, of the First Baptist Church of Beaufort, presided.

For the special occasion, the bride wore a vintage dress of alencon lace, originally her grandmother's, in whisper white. She carried a bouquet of baby's breath in coordinance with her groom's boutonniere and, in lieu of a veil, opted for a flower crown he constructed from blush rose and white sunflower.

Her cousin, Lydia Hastings, of San Francisco, California, was her only attendant as maid-of-honor. Serving his long-time friend as best man was Emory Parrish, also of Beaufort.

After the exchange of personal and traditional vows, a reception was held in the town square with local cuisine from Breakwarter BBQ and a three-tier hazelnut almond cake by the


revered Patty Cakes Bakery. Miss Willadeene's Introductory Ballet Class gave a surprise performance set to Frank Sinatra's "You Make Me Feel So Young" in honor of the newlyweds, and the guests danced until late in the evening.

The couple are childhood sweethearts, both 2007 graduates of Beaufort High School. The groom, son of the late Theodore Davies, manages the Lowcountry Gardens. The bride, daughter of Nora and Dermot Amoruso, is a craftswoman, like her father.

Following a honeymoon in the Italian countryside, Mr. and Mrs. Davies will reside in Beaufort.